The modern marker of disenfranchisement has become…littering by nature lovers?

I take wildlife photos, so I do quite a bit of hiking around local rivers and lakes.  I’ve always packed a trash bag in my photo bag to wrap gear in case of rain.  At some point, I found myself starting to use the bag to pick up litter along the way.  Nothing spoils a great shot of a natural vista or potentially harms the wildlife living there more than garbage.

Time was, I gathered a half-bag of trash on my photo walks.  Then, a full bag.  Now, I pack two bags–the most weight I can carry with my gear–and fill both to overflowing, leaving behind many, MANY, bags worth more of trash.  I don’t have hard data to show that littering has become worse, just personal observation that at least in my neck of the woods, littering is habitual.

The photos posted here are what I found on just one day visiting 4 locations in the Haw River and Jordan Lake area of North Carolina.  Notable is that this particular watershed (which supplies drinking water to ~300,000 people) is located in the heart of what is known as the Research Triangle–dubbed so for it’s high-tech companies and higher-education research universities.

It is an affluent area–with a median income 25% higher than the rest of North Carolina and a significantly higher percentage of persons with advance education. (Census data source) The quality of life gained from our many natural resources and outdoor recreation opportunities figures prominently in the economic development recruitment pitches for the Triangle region, which leads among the mid-Atlantic states in population growth.  It is also an area with strong environment awareness markers–there’s a robust local market for hybrid vehicles, organic food, farm-to-table, and the state is home to a nearly 100 environmental groups

Why are the demographics relevant?

Let’s consider why someone would litter a natural area. These litterers are obviously people who appreciate the recreational benefits of nature enough that they chose to go out into it to enjoy what it has to offer…fishing, hiking, swimming, boating, etc.  So if you like being in nature, why then trash it?  People don’t go to sit by a lake to view the garbage…if you trash it, it destroys the very thing you went there to enjoy…so why do it?

Researchers of litter (yes there is such a thing) postulate that people litter because they feel disenfranchised and powerless.  In other words, they don’t feel connected to society or  the land, and hence why it is considered acceptable behavior to trash the landscape.  Yet, does the high-income, high-education Triangle fit that resident profile?  No really.  So what else could be going on.

Another theory of why people litter is that they lack a sense of personal responsibility. These folks litter because they believe others will pick up after them.    That theory might have some traction if you couple it with a dose of down-right laziness.  Think of it:  Do we have a population of people motivated  and intelligent enough to plan an outing, go buy beverages, drive to a lovely natural setting to enjoy what the outdoors offers, yet also lazy and stupid enough to then throw the empty containers on the ground rather than make the effort to take it with them?  If so, that’s pretty darn lazy as it takes less physical effort to take an empty bottle out of the woods than it does to acquire and bring the full bottle into the woods to begin with. 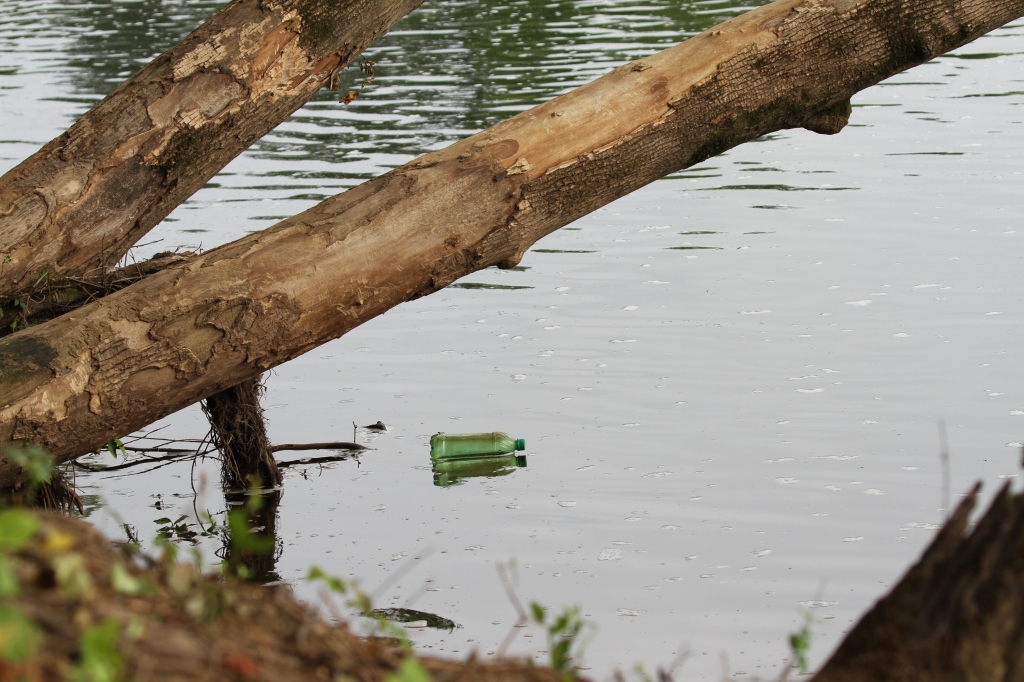 “Ugliness is so grim. A little beauty, something that is lovely, I think, can help create harmony, which will lessen tensions.” Lady Bird Johnson 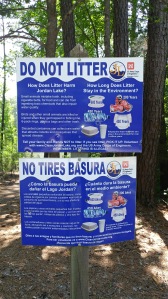 Where do people learn that when you are done with something, you simply throw it down?  Well, it wasn’t because we don’t hear the ‘littering is bad’ public messages.

While there had been anti-litter campaigns before, it was in the 1960’s that Lady Bird Johnson made anti-littering mainstream by making highway beautification her cause as First Lady.  The ‘don’t be a litterbug’ message took off, sparking a societal stigmatization of littering.  Take a look at the ads from that time and you’ll notice peer pressure and shame were key motivators to not litter.   Children were even encouraged to call down their parents when they saw them litter!

The ‘Keep America Beautiful’ campaign was born out of this new mindset. Who can forget in the 1970’s their iconic public service announcement featuring Iron Eyes Cody, with a single tear falling down his cheek at the sight of litter.  We’ve had generations now growing up exposed to not only the anti-littering message but also the environmental movements educational emphasize on the importance of clean air and water along with preserving wildlife habitat. 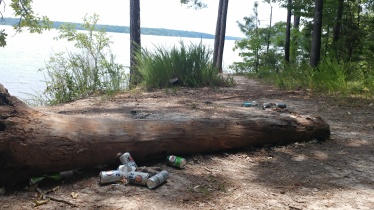 Yet the educational plea hasn’t worked and neither has the threat of legal action.  In the places, I go ‘litter is against the law’ signs are everywhere, so when someone litters, they clearly know that it is against the law.  Legal action isn’t a deterrent because state and local municipalities impose fines for littering when a law enforcement officer spots a litterer in action…and therein is the rub, it must be witnessed which is very hard to do as most of these areas are, understandably, not patrolled. In the bigger picture, littering isn’t considered a serious offence especially when there is violent crime to target with limited funding and staff.

So really, people litter because they can.  Even when told it’s illegal and it’s bad for the environment, people still do it.

Because the prevention and enforcement sides are lacking, volunteers try to meet the need by picking up litter.  Nonprofit organized Adopt-a-highway and Adopt-a-stream/shoreline programs exist.  Yet the volume of trash is so high, not even these noble efforts can keep pace.   In the Triangle area, formal lake and river clean-ups are typically organized 2-3 times per year, depending on the program, location and sponsor.  A shocking amount of trash is collected during these organized clean-ups.

Unfortunately, the accumulation of trash is continual and happens on far more miles of waterways than these events can possibly cover.  The Clean Jordan Lake nonprofit over the past 8 years has organized removal of over 128 tons of trash along 15 miles of shore…that’s nearly 13,000 bags worth of trash!!  The lake boast 180 miles of shoreline…so simple math shows 1) the potential volume of uncollected trash which may be out there along the waterways and 2) how being able to pick it all up is logistically and economically impractical.  Keep in mind, this data is just from one of the regions many lakes and rivers.

While I don’t have a magic answer, I also don’t like to present a problem without offering possible solutions. Volunteers can’t possibility pick up all the trash…there must also be deterrence to prevent the litter in the first place.  It’s not realistic to expect increased funding for anti-litter efforts.  And, it’s not realistic to change the mindset of a ‘don’t give a damn’ litterer overnight.  The quickest short term fix is to bring back the shame associated with littering to get people to modify their behavior.

Here’s my brainstorm idea:  While there the many miles of lake shores and rivers banks can’t all be monitored, there are certain ‘hot spots’ of dense litter activity centered near recreation areas.  Mount some trail cameras in these areas and post the photos of litterers on the internet.  Invite the public to tag people they recognize.  In our social media image conscious society, the negative peer-pressure of public shaming is greater punishment than the threat of a $250 fine IF a law enforcement officer actually sees you in the act.  A basic wildlife camera, like the ones used by hunters, costs less than $100 each…as good of an investment for volunteers, donors and nonprofits as the cost of buying trash bags and ‘adopt’ signs.

Additionally, I highly encourage all visitors to our parks, lakes and rivers to bring a trash bag…for your own garbage but also, be kind and pick up what you see around you too.

What ideas do you have?  Why do you think that here in the Research Triangle, a community in which we are supposed to be well-educated and know better than to litter, it’s still done to such a degree?  Is there so little pride in our home area that we don’t think twice about trashing it?  Surely in a region like ours, we can do better…we at least should try.  Let’s discuss below.

We’re not the only ones depending on these waterways: I took this photo of a fishing bald eagle from the same spot where I took photos of computer electronics, beer cans/bottles, fast food containers, dirty diapers, discarded fishing lines & hooks, a grill, two shoes (not matching), a cell phone and oh yes…a scratch-off lottery ticket.

View all posts by Beth Waldron